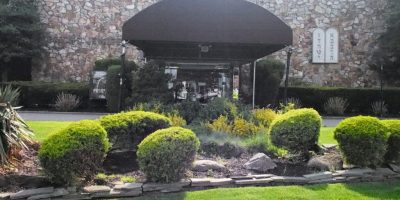 In 1955, a small group of LIRR commuters, mainly from the newly founded Oakwood Development in Jericho, concluded that Jericho was in need of a religious institution. Forty families turned that idea into a reality. In 1956, a large influx of Jewish families moved into the new East Birchwood development, and membership quickly increased. Members’ houses were no longer adequate for classes or services, so in the spring of 1956, a very large, old frame house on a steep grade at the northeast corner of Old Jericho Turnpike and Route 106 became our temporary home. It was known as the “House on the Hill.

In 1957, the JJC purchased the parcel of land on Route 107 on which our synagogue now stands. Construction was not possible for some time, as money had to be raised to finance the construction of a new building. On June 28, 1959, the congregation witnessed the groundbreaking ceremonies for the new site of the Jericho Jewish Center.

With the growth of the congregation to about 200 families, Rabbi Stanley Steinhart became JJC’s first permanent rabbi in May 1960. In 1962, Cantor Israel Goldstein joined the JJC. For several years, JJC membership grew to the point where it was necessary to split the High Holiday Services into two separate venues, one in our Sanctuary and one in the Robert Seaman School.

Vibrant, informative programming has always been a very important component of our mission and vision. JJC presented, and continues to present, programs which commemorate important events in our history. Each year, tribute is paid to the Six Million Jewish souls killed in the Shoah, both on Kristallnacht and Yom Hashoah, with featured films and speakers. The 40th anniversary, celebrated in 1996, culminated with a speech and visit from Nobel Laureate Elie Wiesel.

Rabbi Steinhart retired in 2001 and Rabbi Marvin Richardson z”l became JJC’s spiritual leader. The Holocaust Garden was established in 2001 with a donation from 10 families, the “Dreamers.” A beautiful, peace garden, located in the front of the building, provides a place of solace to many. Personalized bricks cover the walkway. It is a living memorial that continues to grow as new bricks are added as memorials and to commemorate simchas.

With the retirement of Cantor Goldstein in 2005, Cantor Barry Black was hired as JJC’s cantor.

On February 14, 2014, the JJC was devastated by the death of Rabbi Richardson z”l. His booming voice and song-filled poetic sermons will forever be remembered. Maureen Richardson, who lives in New Jersey, continues to visit with old friends in Jericho from time to time. They are both missed. Rabbi Richardson’s memory will forever be for a blessing.

JJC welcomed Rabbi Benjamin Herman to our family in June of 2014; Rabbi Herman brought youthful energy and vitality to the Jericho Jewish Center. His innovative programming ideas were immediately embraced and continue to delight all who participate. Under his direction, JJC has introduced many new, exciting programs geared to all ages. Monthly musical Friday Night Live services engage students and their families, as does Hiking and Halacha throughout the fall and spring, and Latkes and Vodkas at Hanukkah time. Rabbi and Karina Herman led the latest JJC congregational trip to Israel in November, 2015.

Sisterhood also continues to be a major presence at JJC with a myriad of activities ranging from philanthropic to educational, from social to holiday-focused. There are many successful annual events raising money and awareness. The Social Action Team has grown to become a strong force at JJC, leading Coat Drives, Food Drives to restock Long Island food pantries, and Blood Drives. Sandwich Sunday became an annual community event in 2012, and now provides 1,200 lunches to the needy. This important team of people are always on the lookout for ways in which Jericho Jewish Center members can help the community at large, both near and far.

In 2013, under the direction of our latest Religious School Educational Director, Amy Kahane, JJC’s Hebrew School changed from a multi-day commitment to an innovative Jewish Youth Learning Center. Religious classes are held one day a week at the Jericho Jewish Center with participation in a Saturday morning Shabbat-in-Shul program. Supplementary lessons are held via Skype and individual tutoring. Cultural programs and excursions are planned for both students and their families with the broader congregation invited to participate, as well. We are very proud to be a forerunner in innovative Jewish education.

The Jericho Jewish Center is proud of its rich history and heritage. We have an eye on our past as we know it has brought us to where we are today. At the same time, we constantly look toward the horizon to make sure of where we are going. We continue to enjoy, and be rewarded by, the journey.

Listed below are our original forty families.  They founded our Conservative synagogue, which received its charter from the United Synagogue of America, the parent body of the Conservative movement, and came to be known as the Jericho Hebrew Community Center.

My Life As A Cantor By Cantor Abraham H. Wolkin as told to Robert S. Hordos